← more from
Fire Talk
Get fresh music recommendations delivered to your inbox every Friday.
We've updated our Terms of Use. You can review the changes here.

The Sublime Sculpture of Being Alive 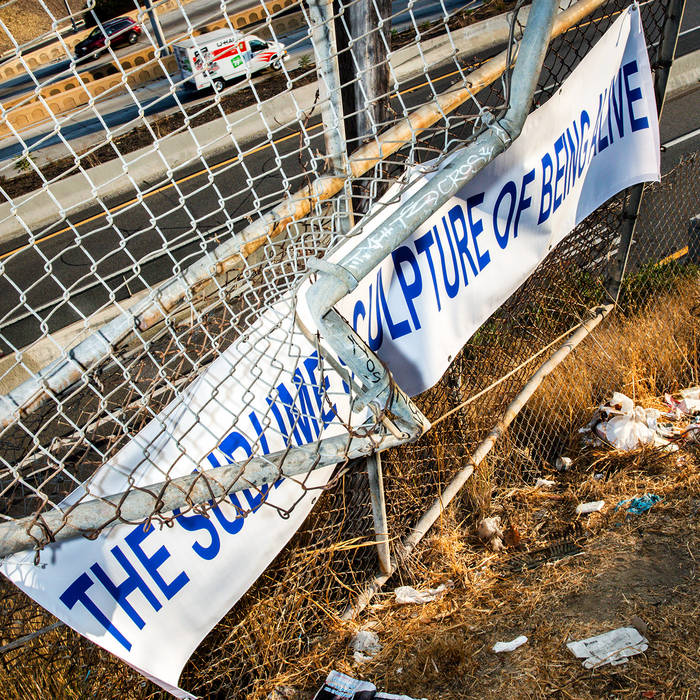 Justin Only a fool would miss the artrock smash of the summer. Favorite track: Stuck.

Back Off Warchild. Seriously.

Behind the clatter and clang of his band, behind the inexhaustible roll of melodies, behind the rhythms that seem to occupy three-dimensional space, Walter Benjamin lurks in the head of Media Jeweler’s Sam Farzin. In his classic 1935 essay “Art in the Age of Mechanical Reproduction,” the German critic observed that our understanding of our lives and our experience of reality is moderated by the dominant technologies, politics, events, and advertising messages of our day; we cannot see our way around them. It’s a claustrophobic thought, suggesting as it does that we might not be as in control of who we are as we believe ourselves to be. But consider its inverse: If there’s no escaping this influence, we’re free to come to terms with it, and to locate ourselves within it. Or, as bassist Thom Lucero puts it, we can forge “an acceptance of self and an acceptance of all the fucked-up shit we’re around all the time.”

He’s talking about the thematic scope of his band’s new album The Sublime Sculpture of Being Alive, which is out August 13th on Fire Talk Records, but he may as well be talking about how Media Jeweler has managed to hone their knotty, rhythmic, and ultimately jubilant music into something strong enough to carry real emotional weight—to do justice to what it feels like to live in the world Benjamin describes. Coming three years after the band’s second album, 1-800-SUCCEED, The Sublime Sculpture of Being Alive is the fullest realization yet of Media Jeweler’s unorthodox sound, the seeds they planted upon their founding in Orange County in 2013 come to fruit. Crucially, it’s also the first Media Jeweler record to make its point plainly; while previous albums were largely instrumental, Farzin’s lyrics articulate the intermixed confusion, frustration, and joy that comes with living a conscious life—ideas that have always been in the music, but largely went unsaid.

The album was recorded in Omaha over three hectic weeks in August 2019. While new member Graham Ulicny was on tour with The Faint, the rest of the band—Farzin, Lucero, guitarist Jac Aranda, and drummer Bryson Mounts—holed up in the studio, where they lived and wrote half of the record. The ceiling leaked; “at any given moment,” Ulicny says, “nothing in the studio would work, or weird sounds would appear and you’d have to chase them down.” The sense of chaos was palpable. But it also mirrored the world that Farzin was writing about.

Throughout The Sublime Sculpture of Being Alive, people’s lives are circumscribed by technology, by marketing, by other people’s ideologies—every attempt at an autonomous life is squeezed in by absurd outside forces. The songs here resist the compression of the modern age, but they also bear the strain of that resistance. Riffs kink out in strange directions, guitars and bass and drums wander past one another; occasionally, Farzin’s voice is the only thing you’d call a rhythm instrument. The relationship between that forced disembodiment, the continued erasure of the physical world, and the accompanying need to resist both, is the album’s hallmark. “I miss when things took up space, I miss the time, I miss the place,” Farzin sings in “Stuck.” Elsewhere, in “Brushstrokes,” he nods at Benjamin again, insisting on visibility: “Art’s not precious if the artist’s hand is not present.” With a pounding introduction and a chorus that seems to peel off in a dozen different directions, the song doubles down on the assertion.

“I’m very fond of things in the world like signs and messaging and advertising—the things that are around you that you just have no control over,” Farzin says, likening the phrase “Smile, you’re on camera” to “a threat masked as a whimsical invitation.” The short, melodic phrases that he, Lucero, and Aranda play at times feel the same way, like mottos or musical sloganeering, and they’re played with a giddiness that sometimes curdles into hysteria. But as the album progresses, things begin to loosen up. The songs get longer, and are both quieter and more exploratory. There’s still plenty to worry about—there’s no escaping self-consciousness in a corporate surveillance state, after all—but the band seems to find some measure of peace in that fact. With its cushiony synths and Farzin’s to-the-skies singing, closer “Smile” is practically beatific.

With that cloud of witnesses surrounding them, Media Jeweler enter 2021 sharper and stronger, and with their vision for their art—and their view of the world—clearer than it’s ever been. It’s a vision that’s not about “being hyper-suspect, but being hyper-aware of the possibility for things to go wrong and go bad, that that’s real,” Farzin says. “And if you say that it’s real, that it’s there, you can think about it more straightforwardly—while still having the manic experience of being alive.”

Bandcamp Daily  your guide to the world of Bandcamp

The Hammer and The Relentless from the Boston band Malleus stop by for a chat.